"Excellent and in good hands -An amazing company with a vast experience especially in water damaged buildings, moulds etc"
Date 03/07/2019

Decontamination is the process of removing or more likely reducing contamination from all areas of concern. This may be aesthetic but more importantly, is the removal of health hazards from surfaces and air.

There is a very specific meaning of decontamination which is the removal and or dilution of contamination and rarely, if ever, means killing organisms. With biological agents such as bacteria and mould,  killing is almost impossible and even when possible, invariably leaves toxic and allergenic residues. The research paper by (Wilson et al) shows how destroying mould is almost impossible and invariably leaves toxins and even carcinogens.

While many believe mould is the main cause of the building-related illness it is now apparent many other contaminants are present (see consensus document). The following two peer-reviewed papers show evidence of bacterial and secondary metabolite contaminates and their health impact and the World Health Organisation (WHO 2009) provides a detailed insight into the contamination and health issues likely in water-damaged properties.

The WHO published a briefing document (77) which again shows that inhalation of mould mycotoxins increases the health hazard of mould by 40 times.

With approximately 20% of the world's population genetically predisposed to health impacts from mould, it may be no surprise that not all in any building have health effects.

The differences in a personal response to exposure or dose will influence the decisions on decontamination protocol.

Differences in approaches to decontamination are generally based on the level of cleaning and reflective cost against the health impact of the worst case.

Generally speaking, all mould and associated contaminates are allergenic but some are toxic or are capable of producing toxins.

Detailed decontamination can be very expensive and there can never be absolute guarantees of success.

Building Forensics offer Air Decontamination as well as Building and Surface Decontamination services but we recommend a mould and building inspection survey first to identify possible reservoirs and causation. This is a matter of choice for the client. (Click here for details)

Building Forensics offer a three-stage decontamination service which is cost comparable to any service on the market, but we believe, outperforms by not just addressing the mould, but also bacteria, fragments and the airborne contaminates which are generally assumed to be the greatest risk and hazard. The process also leaves a long lasting bacteriostatic which, subject to usual caveats, may reduce or eliminate future mould growth. 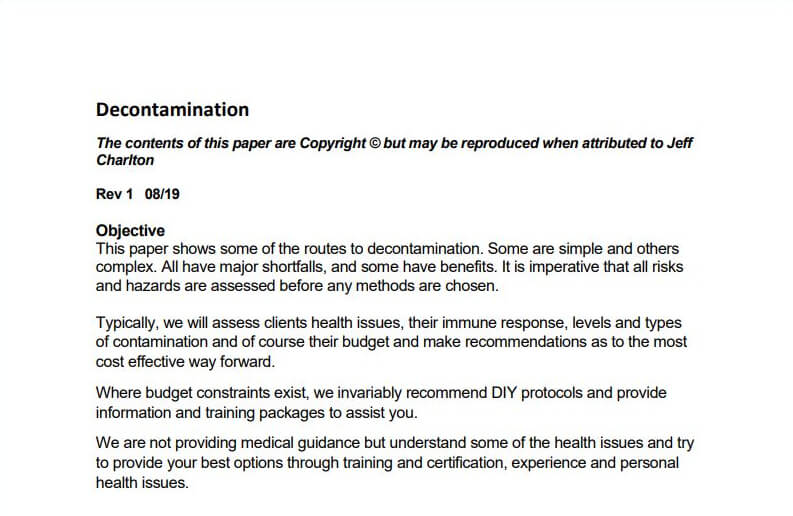